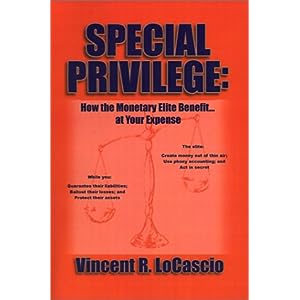 Yesterday I received my copy of Vincent R. Locascio’s “Special Priviledge: How the Monetary Elite Benefit…At Your Expense“. It was published in 2001 by the Foundation for the Advancement of Monetary Education (FAME) and I hope they don’t mind my quoting vast tracts of it here.

This book predates Locascio’s “The Monetary Elite vs. Gold’s Honest Discipline” by a few years. In May 2005, a copy of this latter book arrived out-of-the-blue to my attention at the easyDNS offices. The inside cover was signed “Mark, I look forward to your feedback” and signed by the author, and there was an additional note saying “I hope you can help spread the word to your readers”. He was under the erroneous assumption that my personal blog, (where I sometimes ranted about sound money and crony crapitalism), had readers.

I’m one of those people who underlines passages in books, highlights paragraphs and makes notes in the margins. His book was one of those books that was almost completely underlined by the time I finished it.

This morning I started reading “Special Privilege”, and it looks like the same thing will happen here.

Locascio’s Warning to Us ALL

Keep in mind this was published in 2001, the very first paragraph of Special Privilege reads:

“Unless the United States of America substantially restructures its monetary system, a financial collapse of mammoth proportions is both foreseeable and inevitable. When this collapse will occur is impossible to predict. Why it will occur, however, is already abundantly clear. It can be summarized as two simple words: Special Privilege. The nature and implications of these special privileges are summarized […] throughout this book. [It] puts forth the following proposition: politicians grant special privileges to the monetary elite (bankers, central bankers, and, by proxy, their favored borrowers). These special privileges offend the very essence of both democracy and free enterprise. Furthermore, while these special privileges virtually guarantee a future monetary collapse, they temporarily put off the timing of that collapse.

From a little later in the Introduction, under a section entitled: The Narcotics Analogy:

The United States financial system can be instructively compared to a patient who is dying from narcotics addiction. One form of treatment is to provide larger and larger quantities of the narcotic. Under these conditions, the patient will temporarily function better but will face death or an even more painful cure in the future. Alternatively, the patient can kick the habit, cold turkey — knowing that the withdrawal may be long and require painful readjustments and reassessments. Many people, including the most powerful and influential, receive substantial benefits from the “patient” in his current addicted state. They recognize that the ill effects of increased addiction will not be felt until some undefined time in the future and that they will be forced to forego special privileges and/or benefits of continual addiction during the cure period. Under these conditions, these people favor a liberal, ultimately destructive, continued flow of narcotics.

In our financial system, the narcotic is money, and our banking system is the mechanism by which it is created and distributed. [This book] focuses on the perversions to our society that emanate from a fundamentally flawed banking infra-structure: flawed logic that equates money to wealth; and the flawed conclusion that confidence in the system is an end in itself, regardless of any rational basis for it.

And finally, given the recent 60 Minutes expose on how elected officials can legally insider trade and do things the rest of us go to prison for, I found this passage quite on-point:

Those who are complacently satisfied with the status quo may prefer to deny realities. Others who are blinded by the temporary nourishment they receive from the current system may be unaware that their actions are destroying it.Still others who recognize the situation for what it is may be content to enjoy the party for while it lasts and to extend the curfew as late into the night as possible. Finally, those closest to the money creation process have a vested interest in keeping things as they are for as long as they can. However, they will also be among the very first to know exactly when to bail out — LEAVING THE REST OF US HOLDING THE BAG.

I can already tell that I’m going to simply devour this book. I’m not sure why it took me this long to become aware of it. If all those OWS protestors camped out in parks need something to do to while away the time between police assaults, they would do well to get this book and read it.

Who Was Vincent Locascio?

Sadly, that is past-tense, as he was fighting late stage cancer in 2006 and it was confirmed for me yesterday that he had passed away.

We are not talking about some “net loon” in a tin-foil hat, ranting about reversion to a gold-standard in a world run by an elite cabal of alien lizards.

[…] If both sides can look at the monetary system and agree it’s deeply flawed and only serves a small ruling elite, there may be some common ground found. (See “Special Privilege”) […]