Nouriel Roubini has just put out his 6 reasons why gold is headed lower, adding yet more pessimism and pundit consensus that reinforces my contrarianism 101 view that gold is bottoming, not topping.

Roubini is certainly no Paul Krugman, but like Krugman he is an academic and an economist. Why is that relevant? Because only academics and economists say things like “inflation is benign”, “the crisis has passed” or “the economy is recovering”.

Everybody else, a.k.a inhabitants of “the real world”, like business owners, people who work for a living and people who can’t find any work or people who are priced out of nearly everything know on a visceral level that inflation is rising and the economy is at best, limping.

Speaking from experience, as guy who is fortunate enough to be reasonably well off, even I have noticed a pattern of repetitive sticker shock every time I go shopping. Everything costs more. As a business owner I have an actual feel for the “pulse” of the economy: more businesses are failing, nobody is hiring and everybody is in cost-cutting mode.

The idea that “the crises are over” is pointless to argue, you either buy the party line and you believe prosperity is just around the corner, or you have at some point “done the math” on various fronts and you have come to understand that we are one failed can-kick away from the system becoming seriously unhinged.

…while gold rose quite dramatically (around 700%). 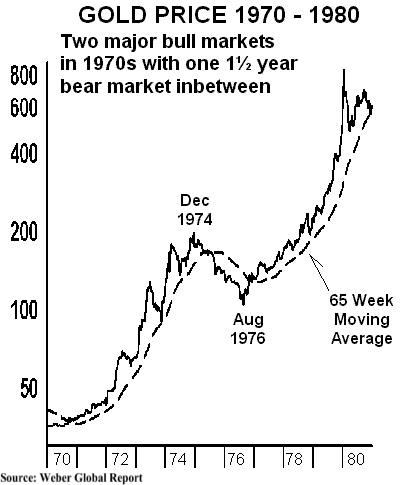 Having said that, I am skeptical that real interest rates will be rising anytime soon. The Fed cannot even say the word “taper” without sending the markets into a tailspin, there is no exit plan on the balance sheet, and with people like Janet Yellin poised to take over (who publicly wishes for negative interest rates), don’t hold your breath for rate hikes. The only way real interest rates rise is if the Fed loses control and if that happens, all bets are off. (And when all bets are off, gold usually muddles through just fine).

Recall that gold endured a vicious pullback during the 1974-1976 cyclical bear market, all within the course of the secular bull run that culminated in 1980 with sky high-interest rates and rampant inflation.

I have long suspected that the “lack of inflation” or even “Deflation” that everybody is talking about (again, mostly tenured academics and political class elites) is akin to the drop in water levels that can often presage a tsunami. Deflation first, then inflation, then high-inflation to one degree or another.